All the news from Bearna-Na Forbacha Aontaithe! 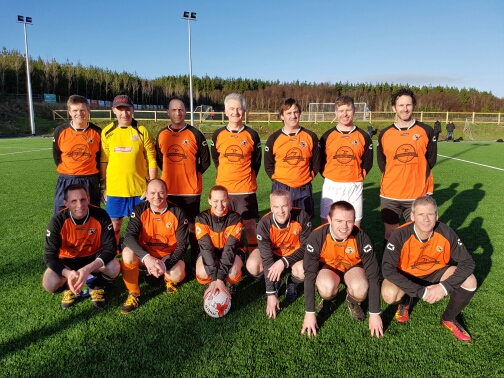 Congrats to our adult selection of coaches who defeated Oughterard FC to win back the Ray Rooney Memorial Cup on December 27th.

They raised over €400 in the process for ACT For Meningitis (a Galway-based charity). 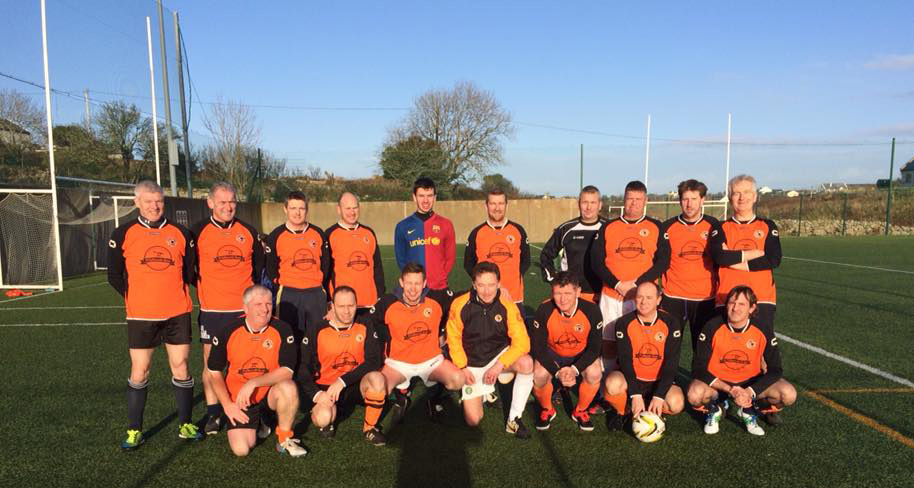 The 2015 Bearna-Na Forbacha Aonthaithe team of coaches.
Calling all of our coaches to step-up for the Club!
The annual Christmas charity soccer match against the coaches of Oughterard FC, for the Ray Rooney Memorial Cup, will take place on Tuesday, December 27, in the grounds of Oughterard FC (New Village).
The kick-off time will be at 1pm, there will be showers available afterwards, and refreshments served at The Boat Inn.

The cost of participation will be a €10 donation to charity. Last year, we raised €600 for Jigsaw Galway. 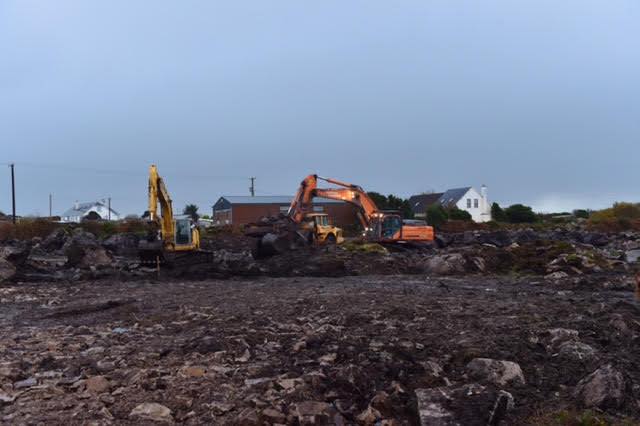 There has been a massive change to the landscape of our site at Knockavoddy, Furbo, in a matter of weeks.

Our contractor, P & D Lydon, has had three heavy machines working during daylight hours for the past month or so.

One of the biggest challenges for us at this site had been dealing with the terrain - an expensive headache - as one part was full of rock, and the other was bog!

Our first phase was dealing with the rock, and at this stage, most of it has been broken down.

The site is almost at the required level to add the 'core', and it will not be long after that before our astro pitches are in place.

Our hope is that these will be ready to use early next year.

When we devised this plan, we wanted to provide facilities that would serve the existing needs of the club/community, but also provide for the future. So, with this in mind, we will be installing one large astro pitch, which can be divided into three smaller pitches for training.

The largest one is big enough to be used for a nine-a-side match at U12 level. The full measurements are 74x46m.

Our contractors are also due to fill the boglands in preparation for our second phase, which is an international sized pitch.

Our sincere thanks goes to the neighbours for their understanding, and to everyone from the club who has worked tirelessly to make this a reality for the children of now and into the future.

It goes without saying, that this is a very expensive undertaking, so if you can help with fundraising, please contact us.

Adult Side Secure A Point After Draw with NUIG 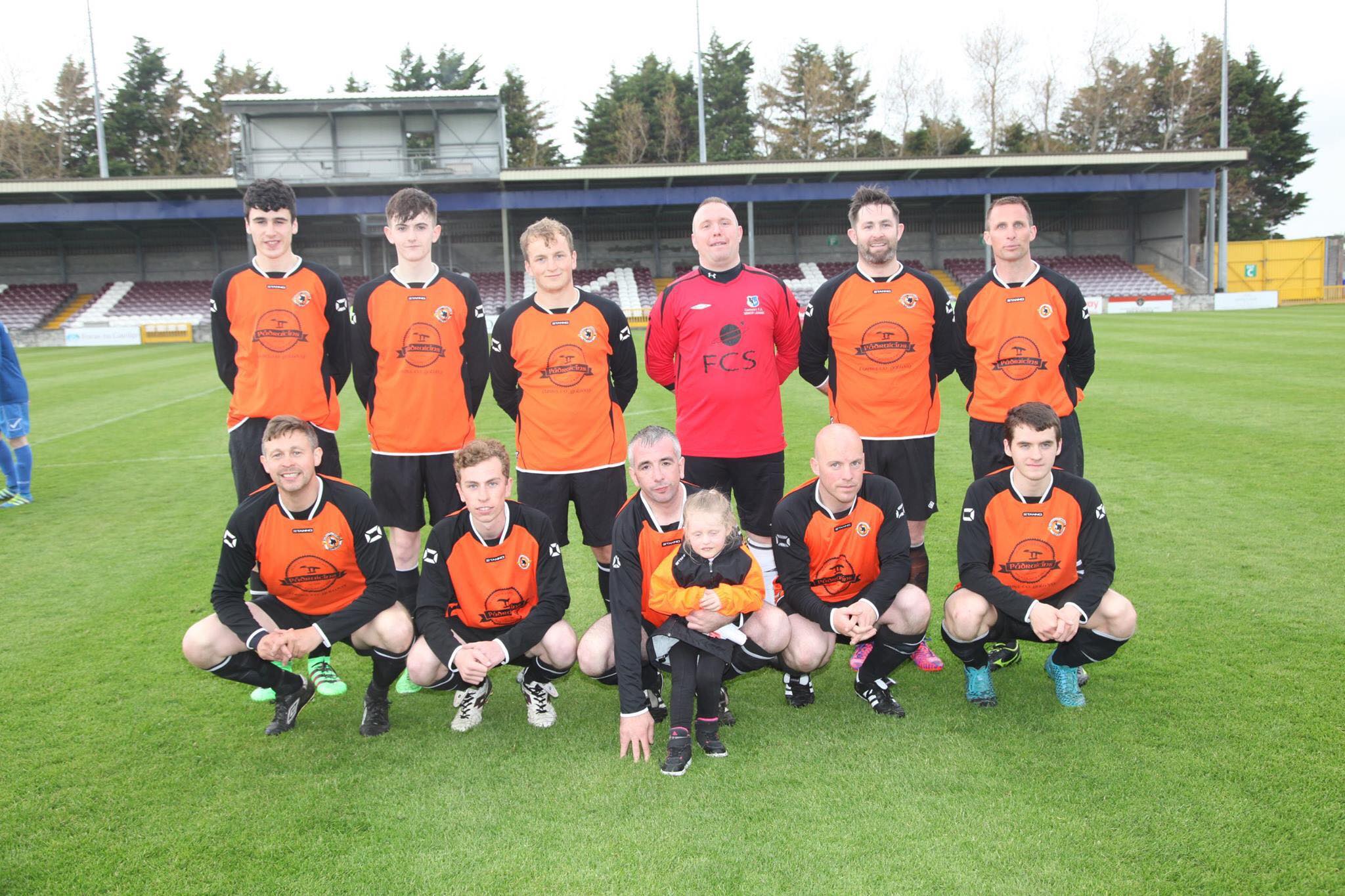 Our adult side secured a fine point with a 1-1 draw against NUIG B at Na Forbacha.

There were excellent performances from Ronan Esselmont, Mattie Flynn, and Rob Carty at the back, while Pat Thorthon pulled off a string of crucial saves throughout the game.

Niall Cox scored the goal following good play from Geoff Sheridan. The 'Man of the Match' was Luke Curran, with a very solid performance in midfield.

Meanwhile, the Bearna Na Forbacha Under 13 A team were missing key players when they met a Cregmore team, with similar problems, on Saturday in Cregmore.
The away-side were under pressure in the first half with Cregmore having the bulk of possession but they found it hard to break down a resolute Bearna defence and it was Bearna who finished the first half with the best scoring opportunity with a missed penalty.

After leading the line, Ronan Bates swapped goalkeeping duties with Cillian O Laoi, and it was the latter who broke the deadlock with a fierce direct free kick from around 35 yards out.

Overall, it was a great squad performance with Oisin Keane and Edward Grealis putting pressure on up front in the forward area.

The Under 15 A side had a fine 2-0 away win over Tuam Celtic in the premier division of the Galway league.

While in the Under 15 division 2 game, Bearna B eventually saw off a spirited Moyne Villa side with a fine 3-2 win at Na Forbacha.

Moyne Villa took a two goal lead in the second half. Both Diarmid De Brun and Manus McCrudden scored a goal each for Bearna both from corner kicks. Late in the game, Seán Twomey popped up to score the winning goal to complete a great fight back.

First Away League Win for U12 Girls 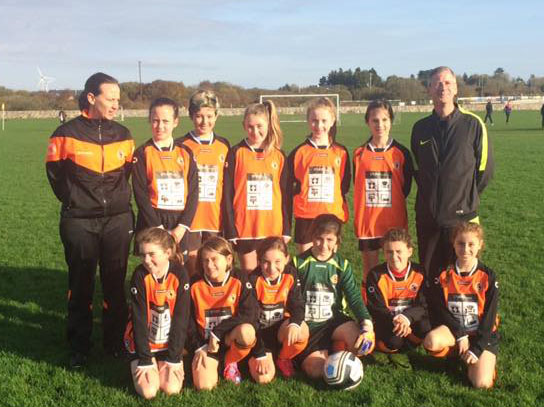 Our U12 Girls team, who won their first ever League game away to Kiltullagh Pioneers.

The Club had a very busy weekend of fixtures last weekend with the highlights being the Under 14s Connacht Cup win, the Girls team win in the Under 12 league, and a fine win by the Under 16 side.

The clubs U14's put on their best display of the year in this keenly contested 3rd round Connachht cup game against Kilmurry from Crossmolina, Mayo which ended with a 4-2 win for the Barna side.

Barna opened the scoring with an opportunist strike from Andrew Egan, and one quickly became two with an outstanding goal from Eoin Rafferty who showed great composure beating two players before riffling to the roof of the net, the visitors pulled one back with a good strike from a free kick making it 2-1 at the break.

Barna quickly got back into their rhythm again at the start of the second half with a great finish from Jack McCarthy who was outstanding in the midfield. Mike O'Connor put the gloss on it with a fourth, the visitors pulled one back in the closing minutes.

Barna had 'Man of the Match' performances in Ross Corcoran who marshalled his defence superbly and Jack McCarthy who ran the show in midfield, other notable performers on the day were Aaron Kavanagh and Liam Connaighle and Jack Griffin.

The Under 16 team had a fine win in Annagdown over Corrib Celtic last Sunday in the Under 16 Galway league. Goals from Caomhan Feeney and Liam O’Nainin sealed the victory and captain Ross Nolan had a fine game.

The Under 12 girls side had a comfortable win in the Under 12 Championship Division.

They travelled to Kiltullagh and dominated the game from the start but had just one goal to show for their first half efforts with a fine goal from Katie Flaherty.

History In the Making for Club's Girls 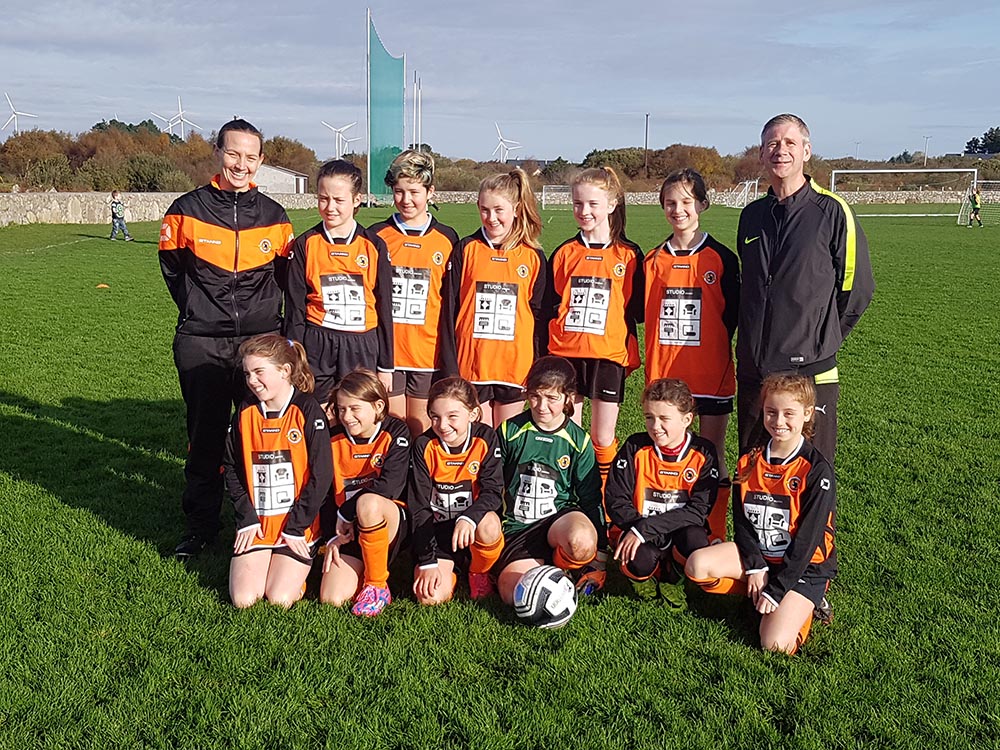 A bit of history was made last weekend at na Forbacha when our first ever girls team played their first Galway Under 12 league game. The visitors were Corrib Celtic and in an excellent game before a large crowd the visitors just came out on top with a 2-1 scoreline.

Coaches, Erin Lynch and Eric Rooney, can be very proud of their team who played very well throughout. The home side played some great football creating several early chances in the first half. However the match was level at the break.

Both teams created several chances in the second half. Bearna na Forbacha took the lead with a goal from Rebecca Rooney early in the second half, however Corrib Celtic rallied well and went on to score two goals to clinch the three points.

Bearna na Forbacha Aontaithe hosted Castlebar Town last Saturday in the 3rd round of the U15 SFAI cup. A bright start by the home side was rewarded in the 18th minute when Cian Hernon rounded the keeper and opened the scoring for Barna Furbo. Further first half goals by Tom O' Connor, Eoin McSweeney and a 2nd by Cian Hernon had Bearna na Forbacha leading by 4-0 at half time. The visitors pulled one back in the second half but Cian Hernon completing his hat trick and the game finished 5-1 to the home side.

The Under 14 side took all three points after a conclusive win over Craughwell in the Under 14 Premier division. After a very tight first half with missed chances on both sides Bearna showed their quality in the second half with goals from Owen Rafferty (2) Mike O'Connor (1) Ross Corcoran (1) from the penalty spot and a brilliant individual goal by Liam O' Connaighle, Liam who was the stand out player on show on the day was well supported with good performances by Patrick Colman and Aaron Kavanagh.

The under 13A side are out of the SFAI Cup when they were well beaten by a strong Mervue side and the Under 12A side were also beaten at home by Tuam Celtic in The Under 12 league but the Under 12B side had a fine 2-0 win over Salthill Devon C at Drom. The adult side went two nil up against Oughterard in the Division 3 of the Galway League but Oughterard put in a strong second half performance to win out 4-2. Jordan Powell scored both goals and Oisin Flaherty and Robbie Carty were the pick of the side. 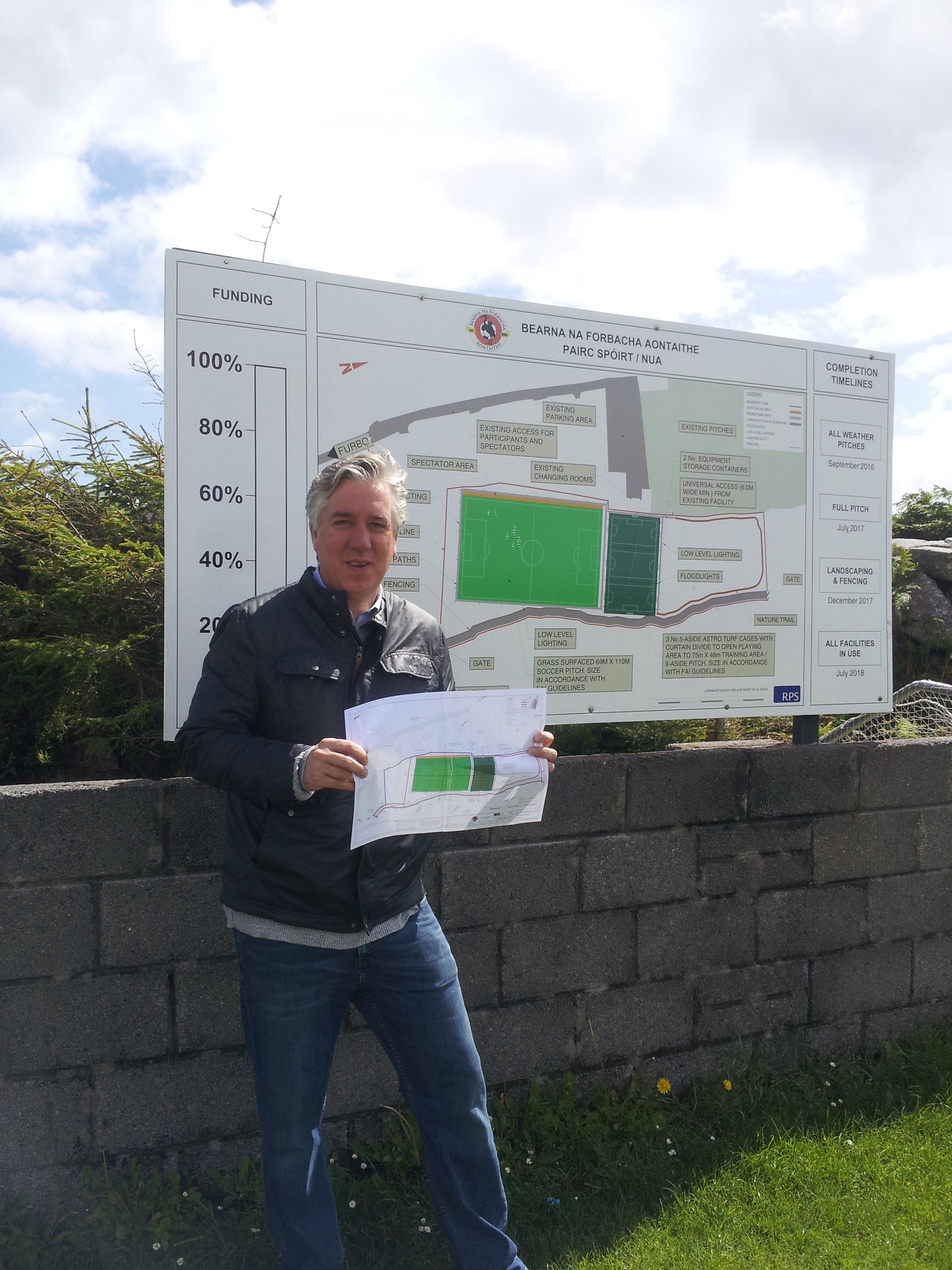 Hi all,
We highly recommend attending this free workshop on Monday evening. Contact details for Nigel are below (limited places).
___

It is very important that clubs attend this workshop so they are aware of the FAI Player Development Plan and how the game format (7v7) used at u10 and u11 is delivered.

The workshop will be delivered by Ruud Dokter, FAI High Performance Director, and is FREE to attend. It will take place on Monday October 24th in Mervue FC.

Format for the workshop:

As there is a limit to the number of places available clubs must email [email protected] to confirm places.

We can hardly believe that work has already started on our three new all-weather astro pitches at Na Forbacha.

It was a massive leap of faith for the club to purchase rocky land alongside the existing playing fields in Knockavoddy, but it is certainly coming to fruition.

We hope that this first phase of the development will take approximately 4-5 months, and that the pitches will be ready to use in early 2017.

Not alone will it provide our players and community with a world-class training facility, but also a source of income, and an invaluable asset for the future.

The second phase of the facility - a full size grass pitch - will start at a later date.

All of this work comes at a massive cost, though, so if you can join our fundraising committee please contact us. 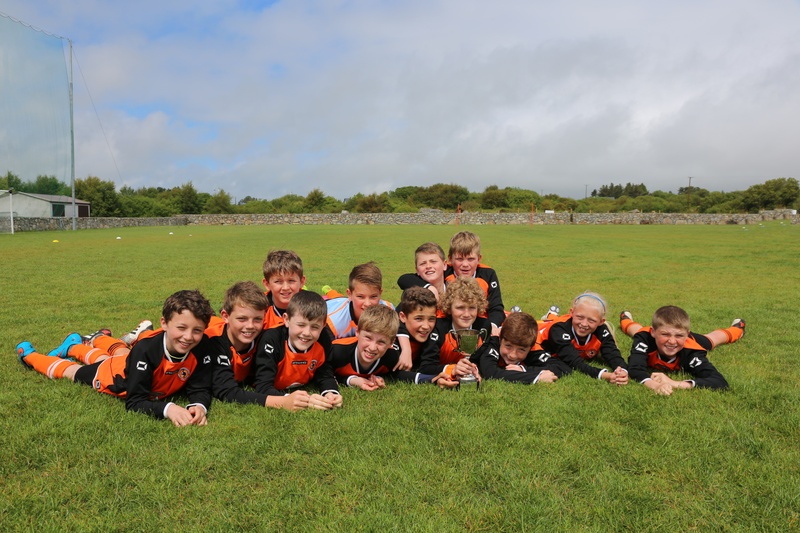 ****Please note that the date on the FAI's event calendar is October 21 in The Connacht Hotel, but their initial notificatication to clubs was the date given below, and this has not been updated on their website.****

The Football Association of Ireland is currently redesigning the coaching pathway and one of the significant changes to the pathway will be the introduction of the National 'C' Licence.

Coaches applying for the course would be required to have been eligible to complete the current Youth Certificate, which includes completion of the Kick Start 1 and 2 and the Small Sided Games Work Shops. Application forms can be obtained by emailing [email protected] and/or [email protected]

The National 'C' Licence Course Dates are as follows and the course fee is €600.

The dates are as follows:

The Coach Education department are introducing a New Coaching Pathway as September 1st so please keep an eye for the release of the New Pathway and Coaches Association Website to be launched for January 2017.